On the passing of this nationally recognized holiday, veterans and guides and scouts and school children gather at the cenotaphs to lay wreaths and remember the dead. Getting in uniform for such occasions was a regular part of my upbringing.

As I am continuing to explore what my role is as storyteller and provocateur, I came across the writing of Aurora Levins Morales, wherein she discusses the role of historian as healer. She talks about the ways that people like myself exist to help complicate history, highlight the gaps, ask questions that have been left out of standard discourse and create opportunities of healing for those dis-serviced by the stories most easily accessed.

This framework feels comparative to the first time I learned words like trans and genderqueer to describe my gender, but in regards to my work with projects like Resilience Building for Trans Folks and Our Allies. The traditional South African proverb, used by K’naan in his song, Until the Lion Learns to Speak reminds us that history is written by the victors. When we are talking about remembering our nation’s involvement in armed conflicts, we must remember that there are levels of nuance and complication to every tale that we fail to grasp in our initial attempts. I am not a war historian, in fact I have been more interested in supporting peace movements, demilitarization and ending military occupations for the majority of my teen & adult life. I come to this critique as an activist, a feminist, and a settler living in occupied territory.

So this practice of setting wreaths around a giant stone phallus, wearing blood red poppies and remembering the “glorious dead” doesn’t sit well with me. As Bill Compton on True Blood says “The Glorious Dead? There is nothing glorious about dying in a war. Bunch of starving, freezing boys killing each other so the rich people can stay rich. Madness.” And yet it’s one of those things that we are taught to keep our mouths shut about, respecting the soldiers who gave their lives for what we have. I remember an experience in elementary school, early 1990s, where this old guy in a uniform got up in front of a gym full of kids and on the verge of tears he talked about fighting, and losing his friends so that we would never need to know what it meant to live in a country at war.

As I moved back from the front row of the youngest children, and found myself at rallies and vigils calling for an end to Canadian military involvement on fronts the world over, I realized that this “country not at war” thing, was really a matter of where the fighting was happening. As I later learned about the ways that my entire life at that point had taken place on unceded territory, and that the cities that I had called home existed thanks to forced relocation, reservations, residential school scoops and biological warfare including smallpox, I reframed the idea of fronts of war to include things that are happening right under our noses that we are strategically taught to ignore.

Armed interactions like the ones that happened at Oka and Ts’Peten (Gustafsen Lake) during my childhood were talked about as one off conflicts, angry natives blowing off steam. While Vimy Ridge or D-day were discussed and held as vital moments in Canadian history, the active involvement of Canadian military in the ongoing colonial project were not.

When history can be told in a way where there are “good guys” like “us”, and “bad guy” common enemies, whether they be Hitler and the Nazis, Mussolini and the Fascists or Bin Laden and Al Qaeda, we use it to reassure ourselves that we were on the right side of history.

When the “guys like us” or the military that we are required to support with our tax dollars, are doing things that are more complicated, or are maybe just clearly “bad guy” actions, like supporting the coup of a populist leader, providing weapons to support genocide or attempting to silence the voices of resistant indigenous people, we are less sure about how to, or if we feel inclined to, “honour our troops”.

So our focus generally remains on conflicts of old, the big world wars, that happened before globalization did the work of concentrating conflict to areas of the world populated by those with less power and access. We prefer to keep the faces of fascism that we use as reference points to historical photographs, rather than to name the practices of our more recent government.  But even in that, we continue to center the experiences of a small segment of the population.Mostly men, and mostly white men, continue to be the focus of how we talk about war. Men who could fight were given a validity that those who wouldn’t or couldn’t were not within the generation of those who fought ‘the great wars’.

My grandfather, having had scarlet fever as a child, was not considered valid to serve despite being of an appropriate age during world war II. He told me of the ways that he carried a shame around that, and the ways that his not serving impacted his reputation and sense of pride throughout his life. Men of his generation were offered one opportunity to prove their worth, an opportunity that many of them never made it back from. The colonial forces offered the eligible populace the opportunity to trade life and limb for “respect”, “patriotism”,and “freedom”. A clever ruse that fed the hungry military industrial complex the bodies it needed to continue the ever growing colonial expansion of global capitalism.

I’m reminded of the ways that colonized people were utilized in this project of empire in this dance number from Disney’s 1971 film Bedknobs and Broomsticks, that showcases working class English, sex workers, colonized Scots, Indians and Caribbean soldiers. Many mainstream media portrayals of wartime leave out the stories of participants from the colonies, including people who served on the front lines to return to home to their colonized homes where they had little to no rights or acknowledgement of personhood. Reading A People’s History of American Empire (American Empire Project) was a really helpful tool in helping my reframing of how the system of empire functions. It helped me to see how many of the choices that have led to wars are made by profit making war monger profiteers to line their own pockets. 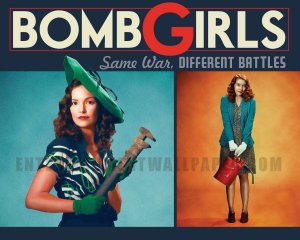 Media attention has in the last few years started to broaden scope to include other perspectives. With TV shows like Bomb Girls and Bletchley Circle telling the stories of wartime from white women’s perspective, discourse expands. We see representations of women doing sex work as an important part of wartime economy and survival. We see representations of women working in STEM fields and struggling to maintain their credibility as the war ended. Thinking about and exploring the untold stories is absolutely crucial to having a comprehensive dialogue about the impacts of war. This means looking at the stories of women, but also the stories of other people who have been systemically left out of our remembering process.

I have to ask myself questions, imagine the answers, of who were the trans people of this time? What were the stories of folks living cross-gender during the highly gender segregated environments like munitions factories, front-lines and sex working hubs?  This means also thinking about the ways that racism, homophobic, classist and ableist systems impact the experiences of wartime. We need to look for and listen to the stories about how global conflicts have unfolded and impacted people other than ourselves. As well as how they unfolded for people like us, when we don’t look like the people in the stories we’ve been told. This includes the perspectives of children killed in drone strikes and others that we are restricted to imaginary and speculative perspectives from as their voices have been taken with their lives. Some voices are hard to find, left out, purposely. This is where our imaginations and other ways of our tapping into collective subliminal conscious have to help.

So I encourage you, on your state sanctioned day of remembrance, to think about whose version

of memory we are holding and carrying forward into our future. When we take this opportunity to think critically about militarization and state sanctioned violence, we can start to work on visioning a future where our participation in such things doesn’t happen as an unquestioned default.

Do we legitimately want to chase the dream of that old veteran? To live in a nation not at war? That involves and requires questioning our participation in all of the empire based systems that function as wars today.

The acts of war that we participate (or are implicit) in today span from the ways that migrant workers are treated under free trade agreements, the resource extraction required to continue production of technology built on planned obsolescence plans, and the ongoing disappearances of missing and murdered indigenous women all over colonized turtle island. War is alive and well in today’s world and if we are to challenge the remembering of war in times past, we must also challenge how we perceive and interact with war around us.

It’s all a lot. It’s heavy. It’s a sombre, respectful, 21 gun salute sort of shadow acknowledgement. It’s a moment of silence to honestly think about a world without war. And what that would require from all of us. Be gentle with yourselves and each other so we can face all this together.

As I learned to say somewhere between the church and Star Wars,

“May peace be with you.”

“And also with you”

Kori is a non-binary genderqueer trans person with more than a decade of community facilitation experience. They specialize in sexual health, harm reduction, community organizing, technical knowledge exchange and radical approaches to wellness.