Learning to love living in this body I live in has been somewhat of an epic and ongoing quest. In the lead up to this weeks’ focus in Resilience Building for Trans Folks and Our Allies; “BODIES”, I wanted to tell a bit of the story of how I learned to live in, tend to and work on loving my non-binary, trans, pain ridden, movement craving physical form.

When I was young I played lots of sports. I was a C-team athlete, showing up early to run cross-country jogs before class and taking off afternoon classes to run races for participation ribbons. The only time I ever got a numbered ribbon was when another person I was racing foot faulted into another lane disqualifying two of the runners who placed ahead of me. Thanks to free in-school athletics, many volunteer teachers and parent coaches I had the opportunity to learn the love of sport through my childhood. This started to shift later in elementary school when the only teams that could find the adults to help them play were the teams that could win. Coaches weren’t lining up to volunteer with teams of kids that rarely won. Looking back it seems even more unfortunate than it did at the time; maybe the rush of winning and trophies was a bigger pull to volunteer with children’s athletics than creating opportunities for young folks to move and play.

By the time I was in high school it had gotten complicated.

I played football in a community based gender integrated league, which in 1996 looked like me and 2 other girls, one on each of three teams. Out of a league of probably 150 young people, there were 3 of us. I played center line – offensive and defensive.

I am not built like your typical linesmen. Never have been. At the time, I probably measured out to 6’ 1 or 2” and less than 120lbs. I had growth spurted my way through my full reach of height before ever filling out. To be totally real I never really did. I was a stick but I also loomed a foot over most of the boys I faced on those lines. They hadn’t reached puberty yet and they were children, being faced down by a budding woman in football pads and helmet. That said, by the time they hit puberty, I was done. My mom was probably right that I would have been seriously hurt if I kept playing. The guys had grown a foot and a half over summer vacation and many of them were filling out to the build of brick house fridges. Their bodies were experiencing an influx of testosterone I wouldn’t see for another decade. We were growing into our adult forms and I was in need of a shift in activity partners.

At the same time I was dancing with an instructor who was very particular about who could train to perform and who couldn’t. I had recently relished the permission I got to cut my hair. My long blond locks made a fairly rapid transition through bob to short bob to mushroom cut. She was clear with me that I would never cross the stage on one of her shows without at least a wig; to her perspective, girls danced girls parts, and long hair was a mandatory aspect of her girls part.

I was too “girl” for football and not “girl” enough to dance.

It seemed by the time I was 15 it was “too late” to try new things. All manner of movement, dance, and athletics had gotten competitive. There were only enough spots for the best. Try outs reminded me of the ways that I was never the fastest, strongest, most graceful. PE classes trained us to be constantly comparing ourselves to each other.

The constant interweaving of losing and movement left a bad taste in my mouth. It was a lynch pin in the messaging that came down the line to the slow kids, the clumsy kids, the chubby kids, the ones with asthma and the ones who didn’t have enough money to buy shoes that would actually fit properly:

You can’t do this.

Your failure is your fault.

When I left high school I went on a one year exchange program to rural Denmark. It took me a few months to have any idea what anyone around me was saying, so meals were not punctuated with the same conversation I was used to. I was away from home, the foods I was used to, the neighborhoods I was used to exploring, the people who knew me and loved me. I did what I could to take in the culture, which of course, while the pieces of language are still coming together could largely be defined by food and drink.

I drank beer or wine with almost every meal as it was offered. I relished the additional meal, kaffe afternoon coffee; an opportunity to eat another 4 or 5 open faced sandwiches and pastries between school and  dinner. I experienced what I later heard called the freshman fifteen, the weight gained when experiencing the shift of leaving home for college. I gained 30 pounds in the first month. I have pretty much never gained weight without height, before or since, and have loved enough healthy fat folks to be critical of weight gain as a measure of pretty much anything other than gaining weight. My host family however, concerned, enrolled me in an aerobics class. I didn’t want to be there. It wasn’t fun. I never made it through one whole class without passing out on my mat.

But outside of the exercise class I was finding my own approach at tending to, exploring movement in, and celebrating my body.  I had my own room for the first time in my life. I was listening to Paul Simon’s Graceland on repeat and dancing naked in front of the mirror. And almost every weekend I would hit the nightclub dance floor with my friends and dance myself into a sweat.

My body was ecstatic in the ways that it transformed beats into flow. I couldn’t get enough.

I started biking. I had ridden bikes around my neighborhood as a kid, to the beach and friends houses; but in Denmark, a land of off-road cycle routes and a culture that respects 2 wheels on shared roads at least as much as 4, I really started to ride.

I went on my first overnight cykeltur bike tour with another exchange student friend from Colorado. As we pitched our tent at the midway point between the towns that we had each been posted to we wondered why we never would have thought to do such a thing “back home”.

Once I got home I kept riding, setting off on a 3 month tour followed by a 3 month stint as a bike messenger only a couple of years later. I rode and rode and rode. The cyclical movement helped me achieve an almost trance like state where my anxiety + depression could realistically be turned into lactic acid and be pushed out of my body.

At least it was something like that. I am not a kinesthesiologist. Understanding how my body works is something I have navigated through experience, more than book knowledge.

What I know is that I felt less overwhelmingly crazy when I was biking a lot.

When I first started taking testosterone I was started on an obscene dose. My already high activity oriented body all of a sudden had way more energy to deal with. I would go to the gym, bike to my jobs (including landscaping, childcare and test riding bikes), longboard between dates houses, fuck for hours, dance til morning and still feel like I had more stuff to move out of me. 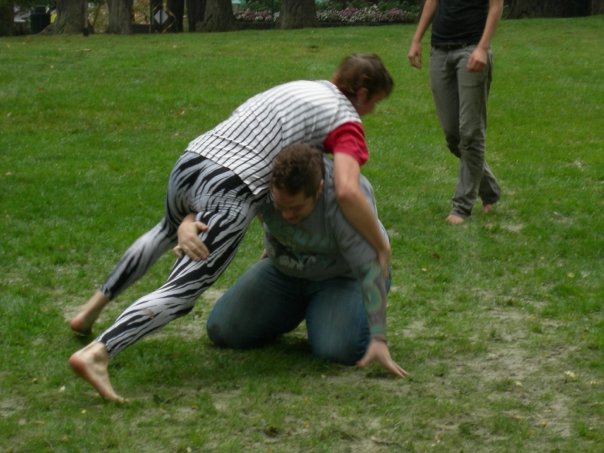 I started organizing queer pool parties that evolved into the All Bodies Swim, which has since evolved into Trans Inclusive Swims in Vancouver,  Queers get Wet in Victoria and All Bodies Swim in Nelson. I reffed and trained with the local roller derby. Those girls could tire me out with their training, but there was politics and dynamics that kept it from feeling just right. I started reffing, competing in and organizing tournaments of Queer Park Wrestling. I rushed through those 3 T- amped years until it all came to a screeching halt. Everything changed when my body flew off my bike and across the intersection of the woodland bike lane and 13th Ave.

The impacts of taking an SUV to my side were pretty big. I had to adjust how I did pretty much everything. I had to learn to manage a body with pain. This meant months of physio, acupuncture, modified activities and turning away and going home when I got to events to find out the amount of stairs to get in was beyond my capacity.

I realized that aspects of this would be chronic. My body would be recovering from this for a long time – if not forever.

I spent 9 months meticulously rebuilding my bike, hand threaded new wheels, sand blasted and powdercoated the frame with the hopes that I would have my body back together by the time it was done. I got on my bike and found that my stamina and endurance had been replaced with inflammation, swelling and fatigue.

That happened 5 years ago and in the time since I have been in the ongoing process of learning to love this body. Even though it hurts. Even though it doesn’t do what it used to be able to. I think this process is something most people must go through, but more commonly later in life than one’s mid 20s. In the 5 years since my accident I have undergone puberty (again- another story for another day) and the fascinating and bizarre transformation of pregnancy and miscarriage. I have learned about my edges in ways I never expected and have pushed myself to keep moving. I still bike a bit sometimes. I dance hard as often as I can. I walk our goats up the hillside when I need to get outside. I find pleasure in pushing my body to it’s edges chopping wood and pushing tillers and wrestling pigs and playing tag with the little ones.

I live in a trans body. I live in a body with pain.  It doesn’t always fit quite right.

This body’s very existence challenges the expectations of what it means to have a womans’ body or a mans’ body. It challenges ableist notions about wellness and fitness. I am breaking the boxes by finding ways to tap into that ecstasy that waits in my muscles and letting it out through joyful movement. I am working on loving this body against the odds.

I look forward to the next stages of learning to be in this body as it continues to change.

I am also looking forward to exploring some of these aspects of our stories with students in Resilience Building for Trans Folks and Our Allies this week as we explore “BODIES”. This round of the course is 3/8ths of the way through. I will be revising and restarting the course in May.

Kori is a non-binary genderqueer trans person with more than a decade of community facilitation experience. They specialize in sexual health, harm reduction, community organizing, technical knowledge exchange and radical approaches to wellness.